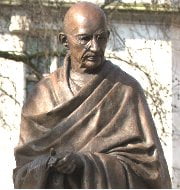 A historic bronze statue of Father of the Nation Mahatma Gandhi was unveiled at the Parliament Square in London. It was unveiled jointly by British Prime Minister David Cameron and Union Finance Minister Arun Jaitley.
M K Gandhi is the first Indian and the only person who had never held a public office to be honoured with a statue at the Parliament Square.
The statue is placed adjacent to the statues of iconic leaders like Britain’s former Prime Minister Winston Churchill and anti-apartheid icon and former President of South Africa Nelson Mandela.
Key features of statue