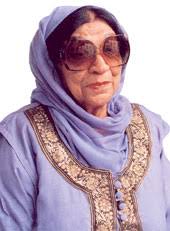 Eminent Hindi Litterateur Krishna Sobti (92) was awarded the 53rd Jnanpith Award for the year 2017 for her path-breaking contribution to Indian literature. She will be overall eight women to win this prestigious award.
She is known for experimenting with new writing styles and creating bold and daring characters in her stories. Her language is highly influenced by the intermingling of Hindi, Urdu and Punjabi cultures.

She was born on 18 February 1925 in Gujrat Punjab, British India (now in Pakistan). She also has written under the name Hashmat and has published Hum Hashmat, a compilation of pen portraits of writers and friends.
She is known for enriching Hindi literature by experimenting with new styles and forms of writing and also by minting several words in Hindi. Her writings have dealt with plethora of issues ranging from partition, relationships between man and woman, changing dynamics of Indian society and slow deterioration of human values.
Some of her celebrated works include Mitro Marjani, Daar Se Bichhudi, Zindaginama, Badalom ke Ghere, Ai Ladki, Dil-o-Danish and Gujarat Pakistan Se Gujarat Hindustan. Several of her works have been translated into other Indian languages and also in English, Swedish and Russian.
She has been recipient of many coveted awards in the past including Hindi Akademi Awards, Shiroman Awards, Maithli Sharan Gupt Samman, Sahitya Akademi Award for her novel Zindaginama, Sahitya Akademi Fellowship and Padma Bhushan.

Jnanpith Award is India’s highest literary honour. Its name has been taken from Sanskrit words Jnana and Pitha which means knowledge-seat. It was instituted in 1961 by Bharatiya Jnanpith trust founded by the Sahu Shanti Prasad Jain family that owns the Times of India newspaper group.
It is bestowed upon any Indian citizen who writes in any 22 official languages of India mentioned in VIII Schedule of Constitution of India and English. Prior to 1982, the award was only given for a single work by a writer. But after 1982, the award is given for lifetime contribution to Indian literature. The award carries cash prize of 11 lakh rupees, a citation plaque and a bronze replica of Saraswati, the Hindu goddess of knowledge and wisdom