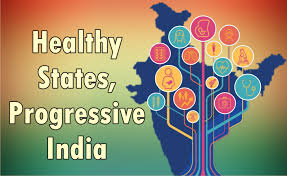 NITI Aayog has released the 2nd edition of report titled “Healthy States, Progressive India: Report on Rank of States and UTs”. The report has been prepared in collaboration with Union Ministry of Health and Family Welfare along with technical assistance from World Bank.

Categories: The ranking was done under 3 categories so as to ensure comparison among similar entities.

UP and Bihar, finished at bottom of List. Bihar occupied 2nd last position in ranking of 21 large states while UP stayed static at bottom of rankings.

Suggestions: Centre should spend 2.5% of Gross Domestic Product (GDP) on healt and state governments should increase their spending on health from an average of 4.7% to 8% of their budget (net state domestic product) on health. Currently, India’s health spending is only 1.15-1.5% of GDP.

Background: The 1st edition of Health Index was released in February 2018. It measured annual and incremental performances of states and UTs for period 2014-15 (base year) to 2015-16 (reference year).

Way Ahead: NITI Aayog is committed towards establishing Health Index as an annual systematic tool so as to propel states towards undertaking multi-pronged interventions to bring better health outcomes.