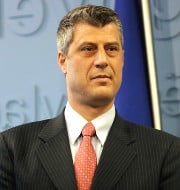 Hashim Thaci has been elected as the President of Kosovo by the Parliament of the country in the third round. He will succeed Atifete Jahjaga.
In the third round, 81 Members of Parliament (MPs) off total 120 took part and Hashim Thaci secured 71 votes of them, proving required simple majority.
With this, Hashim Thaci becomes fourth President of Kosovo after the country had unilaterally declared independence from Serbia in 2008.
Prior getting elected as President he was serving as Deputy Prime Minister and Foreign Minister of the Government led by Isa Mustafa, which had assumed office in December 2014.

Kosovo: It is a disputed territory and partially recognised state in Southeastern Europe after it had unilaterally declared its independence from Serbia in February 2008. It has been recognised by the US and many EU countries. Since 1999, it is under UN administration after the NATO intervention had ousted Serbian forces.  It is landlocked in the central Balkan Peninsula and is facing long-term severe ethnic tensions between Kosovo’s Albanian and Serb communities.