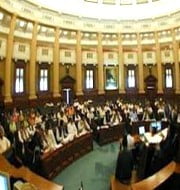 Haryana legislative Assembly has passed Haryana Police (Amendment) Bill, 2015 to abolish the Police Recruitment Board in order to end the nepotism in the police recruitments in the state.
Provisions of the bill

The Bill was mooted by State government led by Chief Minister Manohar Lal Khattar to follow up its commitment of transparent and merit-based selections in the government jobs.
Implications: This bill paves the way for abolishing the need of multiple recruitment agencies in the state for recruitment of group C posts. It will also end the nepotism in the police recruitments in state.