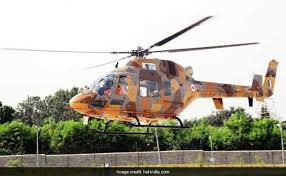 Indigenously developed Light Utility Helicopter (LUH) by Hindustan Aeronautics Limited (HAL) has achieved important milestone of flying at 6 km altitude in Bengaluru, capital of Karnataka. The test was critical requirement towards certification of LUH. Its first flight was carried in September 2016 and second Prototype was flown in May 2017.
The recent flight test was carried out under envelope expansion tests and helicopter exhibited satisfactory performance and handling qualities. With the completion of this milestone, LUH can now undertake high altitude cold weather trials planned in January 2019.

It is 3-ton class new generation helicopter designed and developed by indigenously Rotary Wing Research and Design Center (RWR&DC) of HAL. It will replace ageing fleet of Cheetah and Chetak helicopters used by Indian Armed Forces.
It is capable of flying at 220 kmph, with service ceiling of 6.5 km and range of 350 km with 400 kg payload. It is fitted with Glass Cockpit and powered by TM/HAL Ardiden 1U/Shakti 1U single turbo shaft engine with sufficient power margins to cater to demanding high altitude missions.
It will meet requirements of both military and civil operators. It can be deployed for reconnaissance, surveillance roles and as light transport helicopter. HAL has in principal order for 187 LUH that includes 126 for Indian Army and 61 for IAF.