Gujarat to be first big state to use EVMs with VVPAT 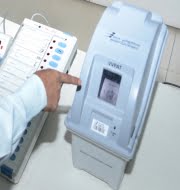 Gujarat will become first big state to use Electronic Voting Machine (EVMs) equipped with Voter Verifiable Paper Audit Trail (VVPAT) in coming Assembly elections to make election process more transparent.
It was announced by Election Commission of India. Gujarat will be second state after Goa to use VVPAT system for the Assembly elections in entire state.
The VVPATs will cover all 50,128 polling booths during 2017 Gujarat Assembly elections. As many as 70,182 VVPAT machines will be used during election elections. Earlier, VVPATs were used on pilot basis in limited polling booths of state in 2012 elections.

The VVPAT is a method that provides feedback to voters after they cast their votes in EVMs. It is independent verification printer machine attached to EVMs. It allows voters to verify if their vote has gone to the intended candidate. Thus, ensure free and fair elections.
In the VVPAT system, when voter presses button for candidate of his choice in EVM, a paper slip containing serial number, name of candidate and poll symbol will be printed for voter. The paper slip will be only visible to voter from glass case in VVPAT for seven seconds, after that slip will be cut and dropped into drop box in VVPAT machine. VVPAT machines can be accessed by polling officers only.

VVPAT is intended as an independent verification system for EVM designed to (i) allow voters to verify that their votes are casted correctly, (ii) detect possible election fraud or malfunction and (iii) Provide a means to audit the stored electronic results.