Government to transform 115 backward districts by 2022 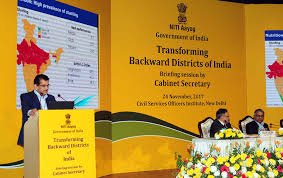 For each of these backward districts, government has nominated senior official in rank of Additional secretary and Joint secretary as Prabhari officer. The First meeting of the Prabhari Officers was recently held in New Delhi under the chairmanship of Cabinet Secretary. It was attended by Secretaries of the important central Ministries.

Prabhari officers will form team with state representatives and bring convergence in their effort. They will take it up as challenge and succeed in their mission by making difference in the lives of millions of citizens in these backward districts.
Prabhari officers will assist District administration in sharing GOI’s vision for 2022 by ensuring convergence of efforts of central and state government and set up robust mechanism to monitor improvements in key outcomes in these backward districts.

If these districts are successfully transformed, it will bring tremendous improvement in internal security environment of country. It will also help to bring convergence in development efforts of different Ministries and state Governments and schemes specially launched by Home Ministry in these districts. It serve as great opportunity to ensure rapid development all regions of the country.

The third party validation of key performance indicators in field of health and nutrition, education, basic infrastructure including roads, household toilets, electricity, agriculture and irrigation will be undertaken to make this program successful.