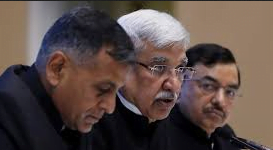 The last delimitation (Fixing limits of territorial constituencies) was conducted across India in 2002, but the four North-eastern states namely Assam, Arunachal Pradesh, Manipur and Nagaland and Jammu and Kashmir were left out.

Recently, a Delimitation Commission was recently set up to redraw the Lok Sabha and assembly constituencies of the above states and UT. Former Supreme Court judge Ranjana Prakash Desai has been appointed as the chairperson of the Commission.