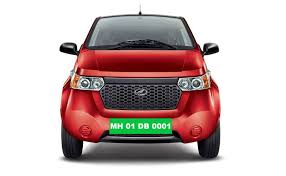 The Ministry of Road Transport and Highways (MoRTH) has approved green licence plates bearing numbers in white fonts for private e-vehicles and yellow for taxis to promote electric vehicles (e-vehicles) in India. The purpose behind distinctive green number plates is easy identification of electric vehicles for preferential treatment in parking, free entry in congested zones besides other proposed benefits like concessional toll.

As per estimate, India at present has 1 to 1.5 lakh electric vehicles. It is projected to grow to about 5% of total vehicles in next five years. Of the about 24 million vehicles sold in India in 2017-18, e-vehicles accounted for barely about 1%. Government has undertaken various measure aimed at promoting e-vehicle’s use and government is considering exemption from permits for such vehicles.

Besides, MoRTH is also contemplating permitting youth in age group of 16-18 years to drive e-scooters, which are gearless and this will lead to a big demand for e-scooters. Currently, under the Motor Vheicles Act, 1988, those in the age group of 16-18 years are granted licence for below 50 CC gearless scooters.
It is also contemplating to ask taxi aggregators to have incremental share of e-vehicles from 2020 onwards, which could be 1% of the fleet every year. Similarly, all public transport operators are also mandated to provide 1% incremental fleet from 2020 onwards.
It is also going to request Union Finance Ministry for 50% rate of depreciation on EVs as against the rate of 15% for conventional vehicles. The proposals also include bringing down GST on batteries to 12% at par with the GST on EVs.