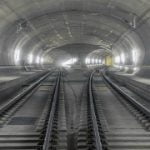 The world’s longest and deepest railway tunnel Gotthard Base Tunnel was inaugurated in Switzerland. The full service of twin-bore tunnel will begin in December 2016.
The Gotthard Base Tunnel is 57-kilometer long and connects northern and southern Europe and also shortens travel time for many rail routes.
It has overtaken Japan’s Seikan tunnel, which measures 53.9 kilometers, as the longest rail tunnel in the world.
Key Facts