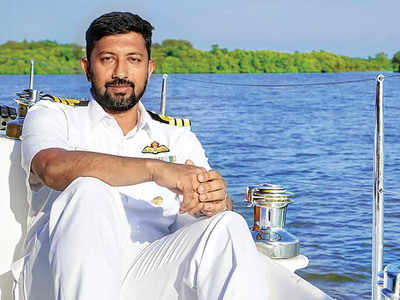 Well-known sailor Commander Abhilash Tomy of Indian Navy has participated in historic Golden Globe Race (GGR), which commenced from Les Sables d’Olonne harbour in western France. He will be representing India in indigenously built sailing vessel Thuriya, a replica of 1950s sailing vessel Suhaili.  The race is expected to end at Les Sables d’Olonne in April 2019. He is the only invitee from Asia to prestigious GGR. There are 18 participants, including one woman sailor, in the race. Commander Abhilash Tomy is only Indian to complete solo, non-stop circumnavigation of globe in 2012-13, on-board Indian Naval Sailing Vessel (INSV) Mhadei, and has covered 53,000 nautical miles under sail.
Golden Globe Race (GGR)
The GGR is being conducted by UK based sailing pioneer Sir Robin Knox Johnston to commemorate 50 years since the world’s first solo non-stop circumnavigation by him on-board Indian-built boat Suhaili, in 1968. In this race, participants are required to sail around the world, single-handed and non-stop. The race does not allow boat designs and technology newer than 1968. It is mandatory for participants to rely traditional means of navigation such as physical maps and observing stars. They are not allowed to use of the Global Positioning System (GPS), satellite communication or modern navigational aids. They are provided with satellite phone for medical emergencies.