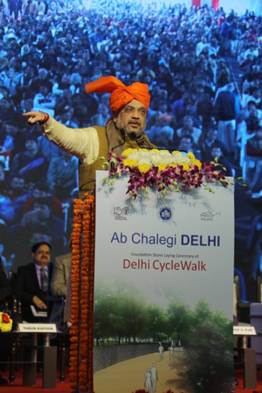 The foundation stone for the Delhi Cycle Walk was laid by the Union Minister of Home Affairs, Amit Shah on Monday, 6th January 2020 at Tughlakabad in New Delhi. The Union Minister of Housing and Urban Affairs, Hardeep Singh Puri along with Lieutenant Governor of Delhi, Anil Baijal were also present on the occasion of the foundation stone ceremony.

The Home Minister stated about the benefits of the proposed Cycle Walk during the occasion and said that green commuting will now be possible as the Cycle Walk would reduce at least 20% of the air pollution of New Delhi and will also give impetus to the Prime Minister of India, Narendra Modi’s vision of ‘Fit India’. The Home Minister also informed that an estimated 11 lakh people are communicating at present on bicycles in the national capital, the Cycle Walk once completed will likely increase the number to 50 lakh cycle commuters. The Home Minister also suggested the Delhi Development Authority (DDA) for encouraging the citizens for the use of cycle by establishing cycle hubs.