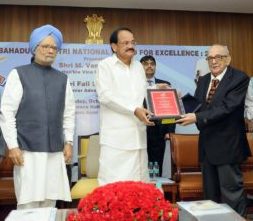 He is one of India’s most distinguished constitutional lawyers and he has argued several leading cases. He was the senior advocate to Supreme Court of India since 1971 and has remained President of Bar Association of India since 1991. He is internationally recognised jurist on international arbitration. He was Additional Solicitor General of India from May 1972- June 1975. He has been awarded Padma Bhushan (1991), Padma Vibhushan (2007)and Gruber Prize for Justice (2002). He was nominated by President as member of Rajya Sabha, Upper House of Parliament for single term (1999–2005).

The award was instituted in 1999 by Lal Bahadur Shastri Institute of Management in memory of India’s second Prime Minister Lal Bahadur Shastri. It is awarded annually to Indian who is exceptionally outstanding and distinguished business leader, management practitioner, public administrator, educator or institution builder for his/her sustained individual contributions and achievements. The award consists of cash award of Rs. 5,00,000 plus citation and plaque. In 2017, it was awarded to Bindeshwar Pathak, founder of Sulabh International.