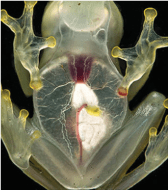 Scientists have discovered a new glass frog species with transparent skin through which its beating heart is visible in the Amazonian lowlands of Ecuador. The frog with the scientific name Hyalinobatrachium yaku is known to possess unique physical and behavioural traits.
The frog has dark green spots on its back. The frog has been discovered by employing a combination of fieldwork in the Amazonian lowlands of Ecuador and DNA sequencing in the lab. However, the scientists have observed that not all frogs have the heart that is white.

Scientists have identified that the newly identified species is already under the threat of extinction. The male of this new species are found to protect the eggs which are attached below the leaves of the tree until they hatch and fall on the water stream below.  So, this glass frogs require pristine streams to breed in. Hence, if the stream gets polluted or dried up then these frogs cannot survive. These new species is already in danger as its habitat is threatened by oil exploitation. The habitat of the species is at present marked by rampant road building and oil exploitation.
Generally, the Amphibians are considered the most threatened vertebrate class on the planet. Of the known 6,260 species of amphibians assessed by using IUCN’s categories and criterias, nearly one-third of the species (32.4%) have been identified as globally threatened or extinct.

The IUCN is the world’s oldest and largest global environmental organisation working in the field of nature conservation and sustainable use of natural resources. It was founded in 1948. It is headquartered in Gland, Switzerland. It is a leading non-governmental authority on the environment and sustainable development. It is also involved in data gathering and analysis, research, field projects, advocacy, lobbying and education. IUCN is best known to the wider public for compiling and publishing the IUCN Red List, which assesses the conservation status of species worldwide.