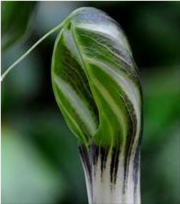 The rare cobra lilies scientifically known as Arisaema translucens has been rediscovered in the western Nilgiris by nature enthusiasts K.M. Prabhu Kumar and Tarun Chhabra after a gap of 84 years. One species of the lilies were found in Thia Shola while the other was spotted in the Pennant Valley forest area of the Nilgiris. It was last collected by E. Barnes in 1932 and described by C.E.C Fischer in 1933.

The cobra lilies have a distinctive translucent spathe. The indigenous Toda tribals of Nilgiris are capable of predicting the early arrival of monsoon from the blooming of the cobra lily’s ‘translucens’. The Toda tribals have an embroidery motif called ‘podwarshk’ resembling the cobra lilies.
It is estimated that only a few hundred cobra lily plants are found in the wild that too in a very small area measuring less than 10 square kilometres in the Nilgiris. Of the lilies present in the Nilgiris, only two are endemic. These lilies are found in shola tree patches. Along with the disapperance of the Shola tree patches, the lilies too have disappeared in the past few decades.
The plant prized for its beauty around the world are at greater risk of extinction from the commercial trade in exotic plants.