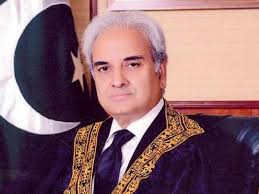 Mulk was born on August 17, 1950 in Mingora, Swat, in Khyber Pakhtunkhwa province. He had worked as lawyer and judge for several years before becoming 22nd Chief Justice of Pakistan (from July 2014 to August 2015). Earlier, he served as acting Chief Election Commissioner of Pakistan (from November 2013 to July 2014).