Evidence Found: A river ran through Thar desert 1,72,000 years back 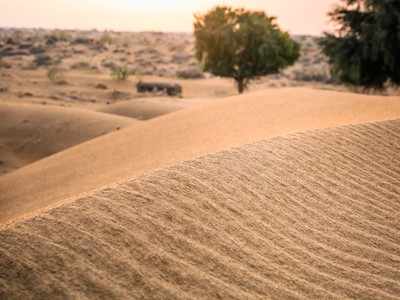 The researchers from Anna University, IISER Kolkata and Max Planck Institute of Germany have found that the population of stone age lived in a different landscape in Thar desert.

The researchers have found a lost river in the central Thar desert. The river had supported human population in the region over 172 thousand years ago. The river would have supported populations of Paleolithic era.

The researchers have made the discovery using satellite images. The images from satellite show strong evidence of dense river channels crossing the desert.

The different phases of the river activity were deciphered by studying deep deposits of sands and gravels that were exposed during a quarrying activity in a near by village.

Luni is the only inland drainage river in Rajasthan. The river rises on the western slopes of Aravalli range. It is also known as Sagarmati river. It flows southwestward and across the plains of the region.

Why is Rajasthan a desert?

The western part of Rajasthan is a desert because, the Aravalli lie parallel to the path of Arabian sea branch of the South West monsoon. The monsoon winds bring rains after hitting mountain ranges. Thus, the western slopes of western ghats receive heavy rains. This is because, the western ghats obstruct the Arabian Sea branch of south west monsoon and brings rains. Similarly, parts of North East region receive heavy rains due to the Himalayas. The Bay of Bengal branch of monsoon winds get hit by Himalayas and provide plentiful rains in the region. There are no rains in Rajasthan as there are no mountains to obstruct the monsoon winds and bring rain.