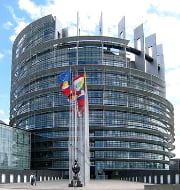 The European Parliament has approved creation of a European passenger name records (PNR) system to combat terrorism
The proposal in this regard was passed by 461 votes to 179 against. Now the EU member countries will have two years to turn it into national law.
PNR is a joint system for security agencies to access airline passenger data on all flights to and from the EU. It will enable police and justice officials to systematically store the data of airline passengers travelling to, from and within the EU.
PNR system will include name, travel dates, ticket details, itinerary, contact details, travel agent and seat number, means of payment and baggage information of the passengers.
Background
The creation of a European PNR system had gained momentum recently following 2015 Paris (France) terror attacks and followed by March 2016 attacks in Brussels (Belgium) which added further urgency.
After these attacks, counter-terrorism officials from the European countries had strongly lobbied for years for the introduction of PNR system. They had argued that sharing data will help them trace suspicious itineraries which may further help in preventing terrorist attacks.