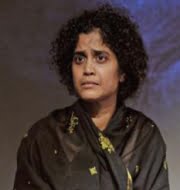 Film-maker and elephant researcher Prajna Chowta (46) has been appointed Chevalier de l’Ordre National du Mérite (Knight in the National Order of Merit) by the French government.
She has been conferred with the France’s one of the highest civilian recognitions in recognition of a life devoted to caring for wild Asian elephants.

With this Prajna Chowta joins few other Indian women to be appointed a Knight by French Government. Earlier in 2016, businesswoman Kiran Mazumdar-Shaw and actor Kamal Hassan were recognised under the French government’s Legion of Honour award.