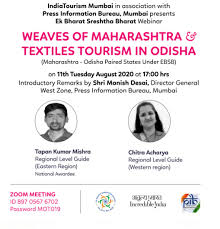 The Press Information Bureau held a webinar in order to recognize the incredible journey of the handlooms and weavers in the country, especially about the weaves of Maharashtra and the Textiles of Odisha. India Tourism, Mumbai has collaborated with the PIB Mumbai in this project.

What happened in the Webinar?

This session focused on different handlooms and fabrics belonging to Maharashtra and Odisha. Both these are also the ‘paired states’ under ‘Ek Bharat Shrestha Bharat’ Mission launched by the government. It wanted to weave the thread of the mission and also honour the handloom weavers in the states.

This initiative was launched by the government of India in 2015 on the occasion of the 140th anniversary of Sardar Vallavbhai Patel. The main objective of this program is to enhance the understanding and bonding between the states so that the integrity and unity of the country can be ensured. This was the vision of Patel also just after the independence when he made the provinces and the princely states to join the Indian union. The concept ‘Paired States’ has been launched here since the government wants to explore the similarities between various states of the country.