The Arab Republic of Egypt is a country mainly in North Africa, with the Sinai Peninsula forming a land bridge in Southwest Asia. So, Egypt is a transcontinental country. This country is a major power in Africa, Mediterranean as well as in the Middle East. In the last week of January, protests began in Egypt which were eventually inspired by the “Jasmine Revolution” in nearby Tunisia, in which the President Zine El Abidine Ben Ali was ousted. The decades of economic frustration with no clear democratic outlet got boiled over into an array of mass demonstrations against the 30-year rule of Egyptian president Hosni Mubarak.

In 1798, when Napoleon Bonaparte was routing the countries after countries in his campaigns, there was an attack on Egypt too as a part of his African campaigns. But his forces were repelled by the British and Turks after a struggle of 3 years in 1801. Following this, Egypt became the part of the Ottoman Empire. 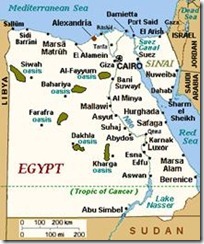 In 1882, Egypt came under the control of the British Troops and remained so till 1914, when it became a British protectorate. In 1922, Egypt became independent and Fu’ad-I became King of Egypt.

King Fu’ad died in 1936 and his successor Farouk, a young boy of 16 years signed the Anglo-Egyptian Treaty. As per this treaty, Britain withdrew all the troops from Egypt and agreed to do so in Suez Canal by 1949.

In 1952, King Farouk was overthrown by a bunch of disgruntled army officers led by Lieutenant General Muhammad Naguib. This is called the Egyptian Revolution of 1952. General Muhammad Naguib led this revolution along with Gamal Abdel Nasser. But later, there were disagreements between Naguib and Nasser and this led to Naguib ‘s forced removal from office.

From June 1956 to 28 September 1970, Gamal Abdel Nasser remained the second president of Egypt. During this period, while Naguib remained in jail, Nasser emerged as a charismatic leader of not only Egypt but also the Arab world.

In 1956, United States decided to withdraw its offer of a grant to aid the construction of Egypt’s Aswan High Dam. The president Gamal Abdel Nasser, who was always willing to stand against the western powers and Israel, responded this by nationalization of the Suez Canal. This was not acceptable to the governments of Britain and France which had vested interests in the Suez Canal.

So, an invasion was planned for Egypt. Israel too had its own hostile plans. This began a series of international negotiations which all failed and in October 1956, Britain and France agreed to carry out a joint intervention in Egypt. This was followed by an Anglo-French ultimatum, which called for Israelis and Egyptians to withdraw their forces to a distance of 10 miles from the Suez Canal. The ultimatum demanded that Egypt should allow British and French forces to temporarily occupy key positions guarding the canal. The US remained in background by now. There was an Anglo-French attack on Egypt began on 31 October with a series of large-scale air strikes. Later Israel also joined and thus Egypt was attacked by 3 allies viz. British, French and Israelis.

This was followed by the diplomatic notes sent to Britain, France and Israel by Soviet Union , threatening to crush the aggressors and restore peace in the Middle East through the use of force. Now US was also in the scene and US President Eisenhower reacted to this as that “if those fellows start something, we may have to hit ’em—and, if necessary, with everything in the bucket.”

The military operations ended in November 1956. In this crisis, the pressure from the both the United States and the USSR forced the three allies France, UK and Israel to withdraw. The occupation ended in March 1957.

But Nasser continued to work for his doctrine.

In 1967, Egypt, Syria and Jordan were forced to indulge in a conflict with Israel. The result of this conflict was a brutal defeat of these three allies. The war is called Six Day War of 1967. The victorious Israel occupied the Sinai Peninsula and the Gaza Strip from Egypt, Golan Heights from Syria, and West Bank and East Jerusalem from Jordan.

This was the last major blow to President Nasser. He wanted to resign out of humiliation but he was so popular that there were mass protests against his leaving. He stayed but for 3 years till 1970, when he died.

Nasser was succeeded by election of his Vice President Anwar el-Sadat as President of Egypt. He indulged in a war with Israel in 1973, in which he was initially successful but later turned into confusion.

The pressure from Soviet Union and UN called the hostile nations to engage in peace talks. The substantial outcome of this war was that Egypt was able to regain the entire Sinai peninsula from Israel, which was snatched away from it in the Suez Crisis.

This was led by a series of talks in the mid of the 1970s. In November 1977, Sadat made a historic visit to Jerusalem, for peace and cooperation talks. After that Sadat was invited by US President Jimmy Cartor to enter into the trilateral negotiations between Egypt, Isarel and US.

This was followed by weeks of secret negotiations in Camp David, US and finally the Camp David Accords came out, which was the first major agreement towards the Middle East peace process. .

By this treaty, Egypt regained control of the Sinai in May 1982. Throughout this period, US–Egyptian relations steadily improved, and Egypt became one of America’s largest recipients of foreign aid. This was one of the greatest ever attempt to bring peace in Middle East and was to establish an autonomous self-governing authority in the West Bank and the Gaza strip.

But, this kind of policy of Sadat made him enemy of the other Arabs. The result was that Sadat was assassinated by Islamic Extremists in 1981.

He was succeeded by Hosni Mubarak, Sadat’s Vice President since 1975. Mubarak was the only candidate to succeed Anwar al-Sadat after the then Egyptian president was assassinated in 1981.

· Mubarak became the fourth president of the Republic; a president who would remain in power for over a quarter of a century, making is the longest serving President in Egypt’s history.

A National Referendum approved in October 1981, Hosni Mubarak as the new president. In 1987, he began his second term,

Mubarak rule is known for ambitious domestic economic reforms in Egypt , that reduced the size of the public sector and expanded the private sector. In Gulf war, Egypt participated, leading to massive debt relief from the west. The economy flourished from 1990s to 2000, the GDP grew by leaps and bounds.

In 1995, Mubarak escaped an assassination attempt in Addis Ababa, Ethiopia, when he arrived here at a summit of the Organization of African Unity.

After the turn of the millennium, there was a dramatic drop in support for Mubarak and his domestic economic reforms.

From 2000 till 2010, the popularity of Hosni Mubarak went down. For the first time in many years protesters started appearing in the streets in 2005, when pro-reform and opposition activists mounted anti-government demonstrations.

In 2005, there was a referendum which voted for a constitutional amendment that will allow multiple candidates to stand in presidential elections. But in the same year, President Mubarak is re-elected for a fifth consecutive term. The opposition party members were elected in the 2005 elections as independents and scored around 20% of the seats. The next year saw an upsurge in the arrests of Muslim Brotherhood members. In 2007, the Amnesty International criticized the torture and illegal detention in Egypt. The following period saw jailing of the newspaper editors, opposition members.

By this time, four main causes of the situation developing in Arab countries including Libya, Sudan, and Tunisia could be seen:

In 2008, the Governing NDP of Egypt said that it would privatise some state firms and distribute free shares to citizens. The Government will keep majority stakes in strategically important assets such as iron, steel, transport and tourism. There was an upsurge in the frequent terror attacks.

This was followed by days of anti-government demonstrations, which were directly encouraged by Tunisian street protests which prompted sudden departure of President Ben Ali. To placate the demonstrators President Mubarak reshuffled his cabinet.

This was followed by the announcement of Mubarak’s resignation on 11 February 2011 and that the Supreme Council of Egyptian Armed Forces would assume leadership of the country.

Tahrir Square, public town square in capital Cairo, was the centre point of the 2011 Egyptian Revolution. On 25 January, it was occupied by over 50,000 protesters and after that it became the main destination for protests in Cairo.

Other names of this Revolution

The revolution is named 25 January Revolution, Rage Revolution , Revolution of the Youth, Lotus Revolution and White Revolution. It took 18 days from January 25 till February 11 and the media is calling it as "18 Day Revolution".

What is Current Position?

Currently, the Government in Egypt is under Supreme Council of the Armed Forces or Al-Maglis, which is a body of 18 senior military men. Hosni Mubarak had handed over power to this body to govern Egypt.

The Al-Maglis is now expected to suspend both houses of parliament and rule with the civilian head of the Supreme Constitutional Court for a transitional period of just a few months. It promises a fair election which are due to be held in September 2011.