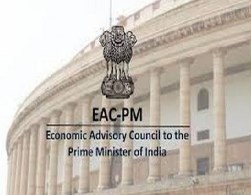 Government of India has reconstituted Economic Advisory Council to the Prime Minister (EAC-PM) under existing Chairman Bibek Debroy. The reconstitution is for a period of two years, with effect from 26 September 2019.

Along with Chairman Bibek Debroy, Ratan P Watal will also continue as Member Secretary of the reconstituted EAC-PM. Apart from these two full-time members, EAC-PM will have 2 part-time members as against 3 in outgoing panel.

While Ashima Goel continues to be one of part-time members and Sajjid Chinoy (Chief India economist at J.P. Morgan) has been roped in as the new member. The economists Rathin Roy and Shamika Ravi, who were the two existing part-time members, have been dropped in reconstituted EAC-PM.

It is an independent body constituted to advise the government (especially prime minister) on economic and related issues.

EAC-PM advises PM Modi on macroeconomic issues and other matters referred to it by PM himself. So far the suggestions made by the EAC-PM to PM on economic matters have not been made public.

The Council submitted papers on issues such as employment, macroeconomic situation and growth to Prime Minister’s Office (PMO).