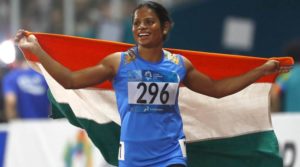 Dutee Chand, the Indian sprinter won gold medal in women’s 100m in World Universiade, 30th Summer University Games held in Naples, Italy. With this win she became 1st Indian woman to do so.

The 23-year-old Indian athlete clocked 11.32 seconds to win gold as she led the race from start to finish.

The Press Information Bureau held a webinar in order to recognize the incredible journey of the hand...

The Government of Odisha has decided to extend the retirement age of the medical officers employed u...