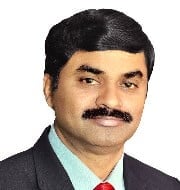 Dr. G Satheesh Reddy, an eminent missile scientist of DRDO has been conferred with prestigious Silver Medal by London based Royal Aeronautical Society (RAeS).
He was bestowed with this medal in recognition of his pioneering contributions as one of the leading navigation and avionics experts and for promoting Aerospace and Aeronautics in India.
Under his leadership, India has developed state-of-the-art advanced avionics systems and sensors for key national strategic programmes and other defence applications.