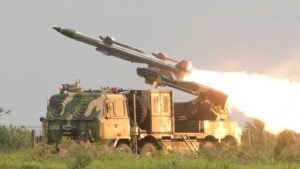 The defence ministry has released the Draft Defence Production and Export Promotion Policy (DPEPP), 2020, with the objective of making India self-reliant in the field of defence production mechanism.

According to the policy objectives, India aims to achieve a turnover of Rs 175000 crores ($25 billion) including export of Rs 35000 crores in Aerospace and Defence goods and services by the year 2025. The policy highlights building a dynamic, robust and competitive defence industry, including Aerospace and Naval Shipbuilding industry to cater to the needs of the Armed Forces with quality products. This is part of the ‘Atmanorbhar Bharat’ Project of the government.

India is now one of the major importers of arms and weapons in the world. The major import partners are USA, Israel, France, etc. and in 2018 also the government had planned a policy as this and nothing happened after that. The defence industry is of around Rs 80000 crores and the public sector contributes 80% of the total defence production in the country. With this policy, the government also aims to engage the private sector in defence production.