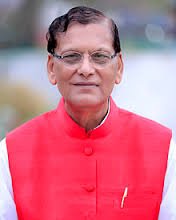 Renowned social activist and founder of Sulabh International, Dr Bindeshwar Pathak (75) was honoured with the Japan’s prestigious Nikkei Asia Prize for his contribution to Asia’s development. He was presented with this award at 23rd Nikkei Asia Prize ceremony held in Tokyo, Japan under ‘Culture and Community’ category for his significant work in tackling poor hygiene and discrimination.
He was among three who were conferred with this award. Other two awardees are Chinese environmentalist Ma Jun who was awarded business innovation prize  for using power of internet to promote cleaner industry and Vietnamese doctor Nguyen Thanh Liem who won science and technology prize in recognition of his work advancing health care for children.

Nikkei Inc. is one of largest media corporations in Japan. It has been presenting Nikkei Asia Prize since 1996 to honour people in Asia who have made significant contributions in one of three areas: Economic and Business Innovation, Science, Technology and Environment and Culture and Community. Former Prime Minister Manmohan Singh and Infosys Chairman Narayan Murti are among few Indians who have won this prize in the past.

He had founded Sulabh International in 1970. It is an NGO that works to promote human rights, environmental sanitation among other social services. It has built two-pit pour-flush ecological compost toilets (Sulabh toilets) which are low-cost environment-friendly toilet throughout India, contributing to better sanitation, safety for rural women and freedom from manual labour of removing human waste. He also had invented technology for producing biogas from human waste to be used for cooking or lamp fuel in 1977.