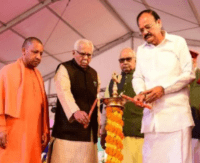 The government of Uttar Pradesh celebrated UP Divas for the first time on 24th January 2019. The proposal was floated by Governor Ram Naik to celebrate the UP Divas on the lines of Maharashtra Day so that people know the history and culture of the state.

The state of Uttar Pradesh was called the Brahmrishi Desh or the Madhya Desh during the Vedic period. During the Mughal period, its territory was divided under governors.
The state was under the Bengal Presidency till 1834. After the Agra Presidency was created under a Governor, the state was brought under its control. In 1858, the North Western Province was created and the seat of power was transferred from Agra to Allahabad.
In 1877 the Awadh was merged with North Western Province. In 1902 the entire province was named as ‘United Provinces of Agra and Oudh’.
The legislative council was constituted in Lucknow in 1921 and the seat of power again was transferred from Allahabad to Lucknow. In 1935 Lucknow was designated as the capital of the United Province.
On January 24, 1950, the governor-general of India passed the United Provinces (Alteration of Name) Order 1950, renaming United Provinces as Uttar Pradesh.