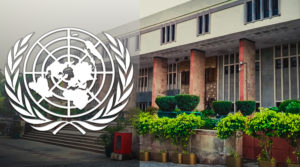 In a recent judgement the Delhi High court (HC) ruled that United Nations Organization (UNO) is not ‘State’ in terms of Article 12 of the Indian Constitution and thus it is not amenable to its jurisdiction under Article 226.

Article 12 of Constitution of India

As per it the ‘States’ in relation to Part III (Fundamental Rights) of Constitution includes Government and Parliament of India (Lok Sabha and Rajya Sabha), Government and Legislature of each of State (Vidhan Sabha and Vidhan Parishad), all local (or other) authorities within territory of India or under control of Union of India.

Article 226 of Constitution of India

It empowers the high courts of India to issue orders, directions or writs, which includes writs in nature of habeas corpus, prohibition, mandamus, certiorari, and quo warranto (or any of them) to any concerned person or authority, including the government (in appropriate cases).