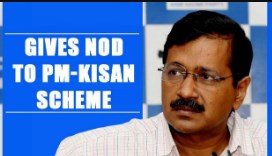 Earlier, West Bengal and Delhi Governments had refused to implement the scheme in respective state/UT but even though West Bengal has stood firm on its decision, the Delhi Government has now sent names of 11,000 farmers for availing the benefits under PM-KISAN.

It is a Central Sector scheme (CSS) with 100% funding from Central government. Under the scheme, the Centre is crediting an income support of Rs.6,000 per year in three equal instalments directly into the bank accounts of farmers.

It was launched in February 2019 just before the Lok Sabha polls.

Beneficiary: Small and marginal farmer families having combined land holding/ownership of upto 2 hectares. The definition of family for scheme is husband, wife and minor children.

The farmer families which are eligible for support as per PM-KISAN guidelines will be identified by State Government and UT Administration.

The fund will be directly transferred to the bank accounts of beneficiaries.

Until September 2019, farmers could not get benefits of PM-KISAN scheme without involvement of state government, but on 26 September 2019, Union Ministry of Agriculture launched a direct enrolment feature in PM-KISAN under which farmers could now register directly on PM-KISAN portal with a self-declaration of land holding. This made nearly 7 crore farmers of West Bengal to be able to directly enrol for scheme bypassing the state government, which is not keen to pursue the scheme. However, the state government will have to verify Aadhaar seeding and other eligibility of farmers before payment is transferred.