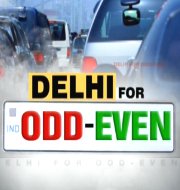 Delhi Government has launched the second phase of odd-even car rationing scheme to check pollution in the national capital.
The second phase will be from 15 April 2016 till 30 April 2016. The scheme aims at curbing vehicular pollution and reducing traffic congestion on the roads of NCR Delhi.
Key facts