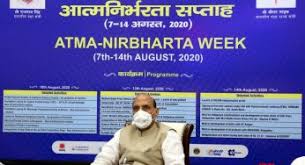 The Defence Minister Rajnath Singh has laid the foundation for a missile-seeker facility and a warhead production unit at Bharat Dynamics Limited (BDL) at Hyderabad, as part of the ‘Atmanirbhar Bharat Saptah’ being celebrated by the company. The foundation laying ceremony has been organized virtually from New Delhi.

BDL is establishing a Seeker Facility Centre for manufacturing and testing of indigenously developed Seekers for missiles. The present-day surface-to-air missiles are fitted with RF Seekers for the guidance of missiles in the terminal phase so that the missile accuracy is improved. SFC is being designed to be modular so as to suit other missile-seekers with an incremental change. The facility will also meet the requirements of the refurbishment of existing seekers of missiles available with the armed forces of the country.

About the Warhead Production Facility

The company is also building a warhead production facility for manufacturing and testing indigenously-developed warheads. This facility has been planned to initially cater to anti-tank guided missiles and air-to-air missiles. This facility is also designed to adapt to all future developments in warhead technology and missiles.

This is being celebrated from August 7 to August 14 with the aim to make India self-reliant with respect to defence production and technology. The country has also published an embargo list of 101 defence items that have been banned for importing till December 2025. These two facilities will contribute to the dream of making the country self-reliant in this field and also will help in saving the precious foreign exchange for the country.