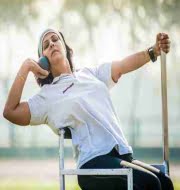 Deepa Malik has created history by winning silver medal in Women’s shotput at the 2016 Rio Paralympics.
With this she becomes first Indian woman to win a medal at the Paralympics. It is India’s 3rd medal in the ongoing Paralympics games at Rio de Janeiro, Brazil.
Malik had won the silver medal in the shotput F-53 event with her best throw of 4.61m in her six attempts.
In the shotput F-53 event, Bahrain’s Fatema Nedham had won the gold medal with the best throw of 4.76m. Greece’s Dimitra Korokida had won the bronze medal with a throw of 4.28m.