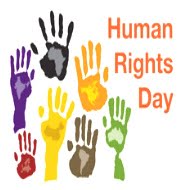 The Human Rights Day is observed annually on 10th December to commemorate the Universal Declaration of Human Rights.
Observance of the day seeks to encourage, support and amplify measures to be taken by everyone to defend human rights.
2016 Theme or campaign: “Stand up for someone’s rights today”. It aims to re-emphasise how important it is to live in peace and harmony, compassion and concern for each other’s rights with respect towards the idea of mutual co-existence.
In run up to the celebration of Human Rights Day, National Human Rights Commission (NHRC) had organised a series of events.

The Human Rights Day was formally established at the 317th Plenary Meeting of the United Nations General Assembly (UNGA) on 4 December 1950.  The Universal Declaration of Human Rights was formally adopted and proclaimed by UNGA on 10 December 1948.  It was adopted as shared standard yard stick to protect human rights across the globe. It recognizes inherent dignity and the equal and inalienable rights of mankind as the foundation of justice, freedom and peace in the world.