Note: Dr Sreedharan was chosen Man of the Year 2002 by Time magazine for completing Konkan and Delhi Metro project within stipulated time and in less cost.

National Updates:
Leprosy: India has Highest Number of Cases
Leprosy is a chronic disease caused by a bacillus, Mycobacterium leprae. Official figures (WHO) show that more than 213 000 people mainly in Asia and Africa are infected, with approximately 249 000 new cases reported in 2008. Read Here

On Joint Indo-Bangladesh forum to save Sundarbans
Sundarbans, the largest single block of tidal halophytic mangrove forest in the world is facing a challenge of the climate change and it is feared that many new islands in the mangrove forest will be submerged. This UNESCO World Heritage Site (1997) is spread in 9630 sq. kms in India and Bangladesh. It is home to Royal Bengal Tigers and a number of other species.

On March 25, 2010 India’s environment minister announces the creation of an Indo-Bangladesh Joint forum or Sundarbans Ecosystem Forum, through which India and Bangladesh shall work jointly to take measures to save the most diverse ecosystem.

Orissa – University of Tokyo agreement on Irrawaddy Dolphin
Irrawaddy Dolphin (Orcaella brevirostris) is found in discontinuous sub-populations near sea coasts and in estuaries and rivers in parts of the Bay of Bengal and Southeast Asia. World Famous Chilka lake ( a brackish water lagoon) and first Indian wetland of international importance under the Ramsar Convention (1981) is a home to 150 endangered Irrawaddy dolphins. (only 900 is the total worldwide population)

In this context Chilika Development Authority (CDA) of the Orissa Government and Japan’s University of Tokyo inked an agreement carry out more studies on the endangered Irrawaddy dolphin. This agreement is a sequel to an MOU signed on March 22, 2006 with CDA to develop an advanced underwater observation systems for the Irrawaddy dolphins, and to provide advanced technology and training for researchers.

Customized hydrophones were used for this study and were first put to use in Chilika lake. Hydrophones is a device to record the sounds of dolphins under water – developed by researchers from Tokyo University. They were extremely useful. More studies are to be done after this new agreement.

Now the same film is again in news. It has been sent to Film Caravan Imperia Travelling short film festival to be held at Imperia, Italy from August 4 to 7, 2010.

Mr Lal has also been awarded Lt Governor’s Commendation Certificate, the highest honor of Andaman and Nicobar Islands, in 2008.

On Indo-German Science and Technology Centre
Union Cabinet clears the proposal to set up an Indo-German Science and Technology Centre(IGSTC) in India to facilitate participation of industry in joint Research and Development projects. It will be a registered society and German contribution will be 20 Lakh Euro per year for next 5 years. This amount comes out to be Rs. 13 crore.

The centre is going to mobilizing resources to carry out industrial R&D projects, and facilitate and promote Indo-German bilateral collaborations in basic and applied science, research and technology through substantive interaction among government, academia and industry.

Business & Economy:
Update on Dubai Crisis:
The Dubai government announces to pump in $9.5 billion into the debt-laden conglomerate Dubai World. Dubai world had submitted its plan to restructure debt worth $23.5 billion to its creditors. As part of its efforts to shore up the fortunes of its own investment arm Dubai World, the government announces to infuse $9.5 billion into the entity.

Spam mails: India is world No.2
Panda Security SL is a computer security company based at Spain.
In January and February 2010 Panda Labs has analyzed nearly 5 million spam messages. Brazil, India and Republic of Korea head the ranking of countries from which most spam was sent during the first two months of 2010. The following graphic which we have taken from Panda labs Blog shows the origin of the spam mails. 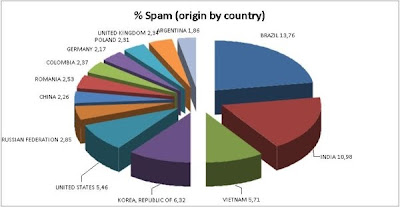 Banking: ICRON -SWIFT agreement
ICRON is ICRA online, a wholly owned subsidiary of ICRA (formerly Investment Information and Credit Rating Agency of India Limited). On March 25, 2010, ICRON and Society for Worldwide Interbank Financial Telecommunication (SWIFT) (Hq. Belgium) enter into an agreement for setting up a payment gateway for transactions in mutual funds. This gateway is to help reduce the time span for mutual fund transactions to one day as against the existing three days. The gateway would be operation by 2011.

Serena Williams has been voted the WTA Tour 2009 Player of the Year for a second successive season. Serena is current World Number 1 ranked female player.

Maharastra: Museum For Sachin
Contribution of Sachin in the field of cricket is ”incomparable” and to encourage fledgling players, the government will build a grant sports museum. The museum will highlight the career of Sachin- Maharastra Finance Minister Sunil Tatkare.