Some of the major awards / recognitions received by Shammi Kapoor : 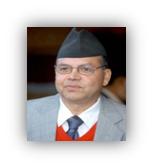