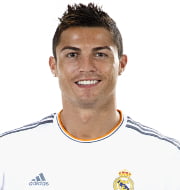 Portuguese footballer Cristiano Ronaldo (31) has won the UEFA Best Player in Europe award for the year 2015-16.
This is second time he has won this award after he was crowned for first time in 2013–14. To bag this award, Ronaldo defeated Antoine Griezmann and Gareth Bale.
In 2015, he had scored 35 goals for Real Madrid and 16 goals in Champions League competition. He scored 3 goals for Portugal national team at Euro 2016.
Other Category winners