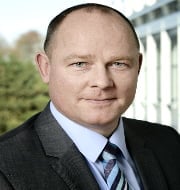 Colin Macdonald has been appointed as Managing Director (MD) of Renault Nissan Automotive India (RNAIPL). He will assume charge on 1 April 2015.
Macdonald will succeed Toshihiko Sano who has been appointed as Senior Vice President of Nissan’s key supplier, Calsonic Kansei in Japan.
In his new role, Macdonald will be responsible for the operations of the Renault-Nissan Alliance factory located at Oragadam in Chennai district of Tamil Nadu. This plant has annual capacity of manufacturing 4,80,000 units and exports these units to more than a 100 countries and regions.
Prior to this appointment Colin Macdonald was Deputy Managing Director of RNAIPL since January 2014. He had started his career at Nissan in 1991 at the Sunderland plant in United Kingdom.
RNAIPL is third biggest exporter of cars from India and the Renault-Nissan Alliance employs more than 15,000 people in India.