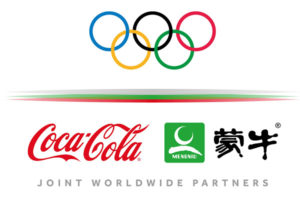 Coca-Cola and Chinese dairy firm Mengniu have signed a multi-year global Olympic deal to become joint sponsors (beverages and dairy) of Olympic Games starting from 2021 to 2032.

Neither International Olympic Committee (IOC) nor two companies (Coca-Cola and Mengniu) involved in sponsorship disclosed the size of deal.

The agreement was unveiled in Lausanne, Switzerland ahead of opening of IOC session in which IOC will choose host city for 2026 Winter Olympics between two running candidates- Italy’s Milan/Cortina and Sweden’s Stockholm/Are.

TOP Programme: This agreement is 1st ever joint partnership under Worldwide Olympic TOP programme. The TOP (The Olympic Partners) programme is the highest level of Olympic sponsorship which grants category-exclusive marketing rights to a selected group of global partners for Summer, Winter and Youth Olympic Games.

Olympic Schedule: Beijing is scheduled to host 2022 Olympics, while 2024 Summer Games will be staged in Paris, France. Los Angeles in California has been awarded 2028 Olympics.

Significance: This partnership with Coca-Cola, an iconic American brand, which is also the longest-standing partner of Olympics, together with a young Chinese company, Mengniu, will give another dimension to promotion of Olympic values globally and will be a great example of unifying power of Olympic spirit.