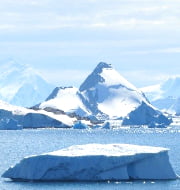 According to a new study conducted by a team of scientists from the University of Exeter in the UK, plant life on Antarctica is growing rapidly due to climate change. The scientists have observed  a sharp increase in biological activity in Antarctica in the last 50 years. For ascertaining the growth, the scientists conducted tests at five cores from three sites and has observed the occurrence of major biological changes across the Antarctic Peninsula. The scientists made use of 150 years’ worth of data to arrive at the conclusion. The study has been published in the journal Current Biology.
According to the scientists, Antarctica will be much greener in the future and the continent’s plants and soils will change substantially even with only modest further warming. The continuous retreat of glaciers will make Antarctica much greener in the future. As per the study, the growth of moss in the continent is a signifier that the region is already undergoing change. At present, the plant life exists only in 0.3% of Antarctica. With increase in land cover occurs decrease in snow and ice cover. The thinner ice cover permits the penetration of sunlight into the previously dark areas allowing the planktons to grow. This would bring ecosystem shift to Antarctica similar to what has happened in Arctic.

In March 2017, the US and European scientists had observed that the extent of sea ice at both poles has hit new record lows in this year’s season. The disappearing sea ice comes as the Earth marks three consecutive years of record-breaking heat and temperature rise, raising fresh concerns about the accelerating pace of global warming.  Also, for the past two years, Antarctica saw record high sea ice extents and decades of moderate sea ice growth.
Recently, the researchers have also found that the Southern Antarctic Peninsula showed no signs of change up to 2009. But after 2009, multiple glaciers along a vast coastal expanse suddenly started to shed ice into the ocean. These glaciers measure around 750 km in length and are shrinking nearly at a constant rate of 60 cubic km and adding about 55 trillion litres of water each year. With this level of shrinking, the region has become the second largest contributor to sea level rise in Antarctica causing small changes in the gravity field of the Earth.
Bharti is the name of third Research station commissioned by India at Antarctica. It will be the third and second active research station along with Maitri (active) and Dakshin Gangotri(abandoned, but used as supply base) for the nation.