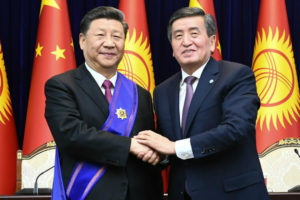 Sooronbay Jeenbekov, President of Kyrgyzstan awarded the country’s highest national prize to the Chinese counterpart (Xi Jinping) who is on a state visit to Kyrgyzstan and to take part in two-day 19th SCO summit.

Kyrgyz’s President reiterated his beilief that current Xi’s visit will open up a new chapter of bilateral ties between two countries.

In response to the honour conferred, President Xi highlighted that medal has fully demonstrated Kyrgyz people’s profound friendship towards Chinese people and that China values it very much.

Xi showcased China’s readiness in joining hands with Kyrgyzstan so as to deepen traditional friendship between two countries and also towards pushing forward Kyrgyzstan-China comprehensive strategic partnership for new bilateral achievements which will benefit the people of two countries.

It is a Eurasian political, economic and security alliance in which China plays an influential role.

India and Pakistan were admitted to Beijing-based regional security grouping in 2017.

The year 2019 will see the 19th SCO summit which is being hosted by Kyrgyzstan.