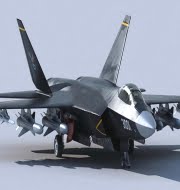 China has successfully tested the latest version of its fifth-generation stealth fighter jet J-31 (now renamed the FC-31 Gyrfalcon).
The newest version of twin-engine FC-31 took to the air for the first time recently. It is considered as China’s answer to the US F-35, the world’s most technically advanced fighter.

China by introducing this fighter jet is trying to end the West’s monopoly on the world’s most advanced warplanes especially 5th generation fighter jet. When completed, the FC-31 will become the China’s second 5th-generation fighter after the J-20, which was put on its first public performance at the Zhuhai Air Show in November 2016.