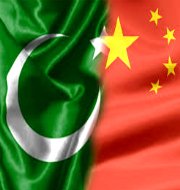 China and Pakistan have signed an agreement for the launch of a special satellite to monitor the development of the multi-billion dollars China-Pakistan Economic Corridor (CPEC) projects.
In this regard, both countries have decided for development and launch of the Pakistan Remote Sensing Satellite (PRSS-1) System and launch a satellite in June 2018.
Implications

Comment
This bilateral cooperation in space domain would open new arena of socio-economic and scientific cooperation and would give boost to the historic bilateral cordial relations in other fields between all-weather friends.