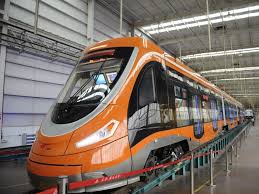 The ecologically-friendly tram emits only water without any pollutants. It does not produce any nitrogen oxides (NOx), as the temperature of e reaction inside the fuel cell is kept under 100 degrees Celsius.
The tram, having three carriages with 66 seats and can run for 40 kilometers at a maximum speed of 70 kilometers per hour after being refilled with 12 kilograms of hydrogen.
The tram coach rides on a 136-year-old railway line and connects several industrial heritage sites of Tangshan, one of China’s oldest industrial cities not far from the capital Beijing. It has latest low-floor technology which has kept the distance between carriage floor of tram and rail line only 35 centimeters and remove need for station platforms and making boarding easy for passengers