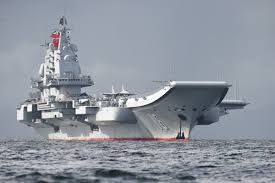 The China Shipbuilding Industry Corporation (CSIC) has announced to build its first nuclear-powered aircraft carrier Liaoning by the middle of the next decade. It was announced as part of its list of ambitions hope to achieve in weaponry and technical developments for People’s Liberation Army (PLA)-Navy by 2025.

China has ambition to have four carrier groups operating with PLA-Navy by 2030. The Liaoning is currently only carrier in fleet, but its variant Type 001A is expected to go into full service by end of 2018. The Type 001A was first aircraft carrier built indigenously by shipyard workers in China. Liaoning is derived from old and unfinished Soviet hull, purchased by China from Ukraine.
At present, China’s navy has two aircraft carriers running on conventional oil. French Navy’s flagship, the Charles de Gaulle is only non-US aircraft carrier powered by nuclear reactors. US Navy’s each Nimitz-class and Ford-class carrier is run by nuclear power.