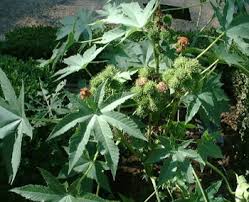 According to study conducted by researchers from University of Hyderabad, Castor bean plants can prove useful in fighting soil pollution. It was found that these plants can absorb toxic heavy metals from soil from these polluted areas due to industrial pollution.
The roots, leaves and stem of these plants from the polluted areas contain heavy metals such as lead. It was also observed that these plants accelerate the remediation of polluted soils due to presence of some chemicals in them known as chelators which enhances the capability of the plant to accumulate heavy metals.

Castor seed plants are generally known to be one of the sturdiest plants that can grow in areas where the soil is highly polluted, including in areas where mining is carried out. Traditionally, Castor oil (also known as ‘Arandi ka tel’ in Hindi) has been an age old home remedy for a variety of ailments in India.