Canada to Supply Uranium to India for 5 Years 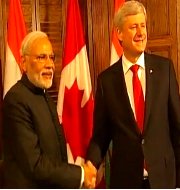 Canada has agreed to supply 3,000 metric tonnes of uranium to India under a $254 million five-year deal to power Indian atomic reactors.
The agreement for uranium supply was signed by Prime Minister Narendra Modi along with his Canadian counterpart Stephen Harper after comprehensive talks in Ottawa, Canada.
The agreement comes in line with the Canada- India Nuclear Cooperation Agreement that took effect in 2013.
As per uranium supply agreement, Canada’s Cameco Corporation will supply uranium to India for next five years starting from this year. These supplies will be under the International Atomic Energy Agency (IAEA) safeguards.
Canada is the second-largest producer of uranium globally and is the third country to supply uranium to India after Russia and Kazakhstan.
It should be noted that in the 1970s, Canada had banned exports of uranium and nuclear hardware to India after it was alleged that India had used Canadian technology to develop a nuclear bomb.
However, Canada- India Nuclear Cooperation Agreement signed in 2013, Canada moved away from ban and agreed to supply uranium to India.