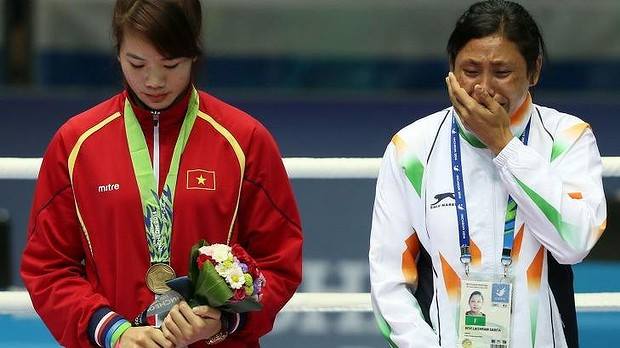 The International Boxing Association (AIBA) has banned Indian boxer Sarita Devi for one year.
She was banned for not accepting her bronze medal at Asian Games medal ceremony. She was also fined 1000 Swiss Franc for the act.
Earlier, AIBA had suspended Sarita from all competitions. In September 2014, during Asian Games she had lost in the semifinals of the women’s lightweight competition at Incheon, South Korea.  She had won bronze medal in the semifinal.
However, she had refused to accept the medal and tried to give her medal to her opponent as a mark of protest, citing wrong judgement from referees.
Later, she apologized but could not fall in line with AIBA’s stringent rules and regulations.