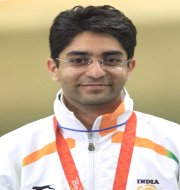 He has won Olympic gold medal (2008), World Championship gold (2006), 7 Commonwealth Games medals and 3 Asian Games medals in shooting. He became first Indian to win individual Olympic gold medal by winning the top prize in 10m Air Rifle event at 2008 Games held in Beijing, capital of China. He was given Arjuna award in 2000, Rajiv Gandhi Khel Ratna in 2001 and Padma Bhushan in 2009. He narrowly had missed out on second Olympic medal at 2016 Games in Rio de Janeiro, post which he decided to retire from sport at the age of 33 to make way for next generation of Indian shooters.