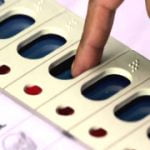 In 2018 general elections of Bhutan, Druk Nyamrup Tshogpa emerged largest single majority party by winning 30 seats, while Druk Fenasum Tsogoga got only 17 seats. Prime Minister Tshering Tobgay of  ruling People’s Democratic Party was defeated in this election. In this general election, there was 71% voter turnout. This poll percentage was higher than 66% in 2013. Late Tshering, President of Druk Nyamrup Tshogpa, will be next Prime Minister of Bhutan.

A team of scientists from the Bombay Natural History Society recorded a new species of bird. It has ...

The International Day of Happiness is being celebrated on March 20, 2021. The day is observed every ...

China is now claiming the Sakteng wildlife sanctuary in Eastern Bhutan to be part of its territory. ...

On 29th June 2020, the President of India has reappointed Senior Advocate K.K. Venugopal as the Atto...

On 29th June 2020, a concession agreement was signed between the Kholongchhu Hydro Energy Limited an...

On May 16, 2020, the Sikkim Government celebrates its 45th Statehood Day. Every year Sikkim celebrat...